Abstract - To summarize we can say that because of the hikers, marmots in highly frequented areas spend much less time outside their burrows and consequently less time foraging than animals in more remote areas. Hikers affect the marmots in the utilisation of their territory. In highly frequented territories the marmots adapt to shorter flight distances and less time in the burrows after being disturbed. Further we can say that different forms of hiking have a different influence on the behaviour of marmots.

The Alps as a sensitive biosphere loses more and more of its wilderness area to the increasing tourism. The disturbing influence of winter activities on animals has been shown to exist (Jenny, 1984; Stucky, 1983). Our study on marmots is part of a larger project called "Tourismus und Wild" which deals with the influence of various forms of summer tourism on the behaviour of alpine mammals and birds. The object of our study on marmots was to establish how much their behaviour is influenced by various forms of hiking. This presentation deals with the following questions:

- How strong is the influence of hikers on the daily activities of the marmots?

- How does the presence of hikers affect the animals in the utilisation of their territory?

- To what extend do marmots adapt to the hiking tourism?

-How do marmots react to hikers crossing their territory at random in comparison to those who keep on the frequented trails?

Our study took place in the area First in the Bernese Oberland (Switzerland) in the summers 1988/89. The area can be reached with a chairlift from the tourist resort Grindelwald. There is also a restaurant and two well developed hiking paths leading through marmot habitat. On a nice summer day it is not uncommon that far more than 1000 tourists populate the area.

We defined territories to be highly frequented when they are adjacent to, or are crossed by one of the two main hiking paths. Where this is not the case the area was defined to be less frequented. To study the daily activities, three highly and three less frequented territories, where we had previously ascertained the number of individuals, were chosen. We observed the marmots from the first appearance in the morning till the last animal disappeared in the evening. Each group was observed during five whole days employing the scan-sampling-method (Altmann, 1974) using five minute intervals (Holmes, 1984).

T o establish the utilisation of the territories, the path was paced off at various times of the day and it was recorded how far from the path the animals were. Once in the morning between 7.30 a.m. and 9.00 a.m. before hikers arrived, once at noon between 11.45 a.m. and 1.15 p.m. when the greatest number of hikers were in the area and once in the evening between 5.45 p.m. and 7.15 p.m. when the tourists had left again. Each period was recorded three times. To find an answer to the question of adaptation we carried out experiments in each type of group. We walked towards the animals to establish the flight distance. Then we went to the burrows into which the animals had disappeared and left the territory to measure the time until at least one animal reappeared above ground. Again experimentally, we established the influence of hikers on the paths compared with those off the beaten trails. First we walked the paths ourselves and recorded the relevant information such as flight distance and number of animals seeking refuge in the burrows. Then we walked through the territory at random keeping the same distance to the burrows as in the previous experiment and recorded the same data. The influence of hikers on the daily activities of the marmots.

Fig. 2 shows the proportion of foraging time to total above ground activity.

In less frequented areas there were always more than 40 % of the marmots feeding.

How does the presence of hikers affect the marmots in the utilisation of their territory?

Fig. 3 shows that at noon, all animals still above ground were more than 40 m from the paths. Most animals even more than 100m.

In the morning, before the first hikers arrived and in the evening after the tourist had left the area most animals were seen in the vicinity of the paths.

The distribution of the animals within their territories is obviously strongly influenced by the hikers.

The reaction of marmots to hikers crossing their territory at random and those who keep to the frequented paths. When we stayed on the paths the average flight distance was 31 m (n=20). When we went crosscountry through the territory the average flight distance was 51 m (Fig. 6). A significantly greater number of animals sought refuge in their burrows when confronted with hikers off the path than when confronted with hikers who kept to the trail (Tab. 1). We conclude that marmots react different by different forms of hiking tourism because of the potential danger they see in the appearing hikers.

Our data shows that hiking tourism has a strongly disturbing influence on the behaviour of marmots. Especially impressing is the fact that the animals in highly frequented territories have much less time for foraging than those in less frequented areas. The ability of the marmots to adapt exits to a certain degree. However, the results on the daily activities show that distinctly more adaptation would be necessary before the animals can utilise their time for foraging to the same degree as those in less frequented areas. Compensation by speeding foraging is not possible because food intake is limited by the amount of food which can pass through the digestive system of the animals (Bobek, 1977; Kilgore, Armitage, 1978). A negative influence on the fitness of the animals in the highly frequented areas has to be expected. A longterm study on population dynamics on the First might give an answer to this question.

We interpret the different habitat use of marmots in highly frequented areas as a restriction in the procurement of food rather than as an adaptation.

That marmots react less to hikers on the path than to those who cross their territory at random indicates an adaptation. As long as the people stay on the trail the direction of their progress is predictable to the marmots. This is, of course, not the case when hikers cross the territories at random.

seeking refuge in the burrows

hikers on the path

hikers off the path

Fig. 1: Percent of animals above ground in less frequented areas (white) and in the vicinity of paths (black) 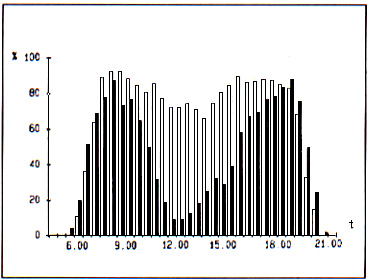 Fig. 2: Percent of animals feeding during above ground activity in less frequented areas (white) and in the vicinity of paths (black) 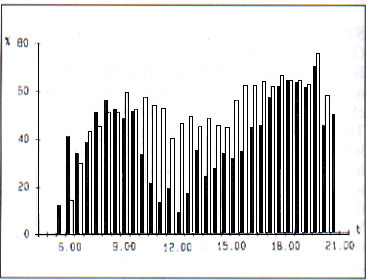 Fig. 3: Distance of the marmots to the path in 20 meter-zones during different times of the day. 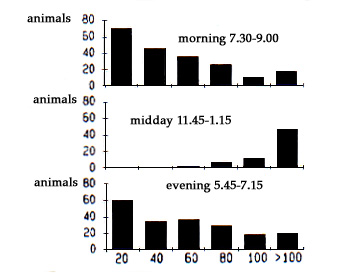 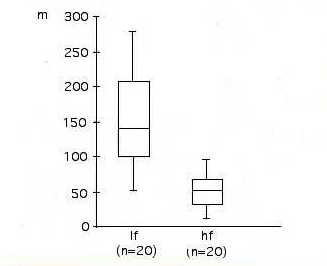 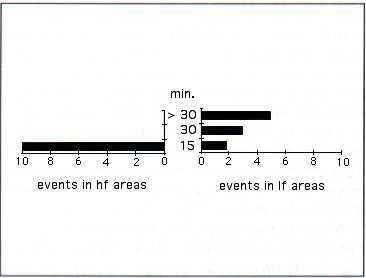 Fig. 6: Flight distance of marmots when confronted with hikers on a trait (on T) compared with those crossing the territory at random (off T). Median, first and third quartil, minima and maxima (Mann- Whitney U-Test: p<0,01). 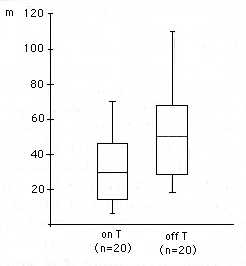