Abstract - Alpine marmots show a seasonal acclimatization of physiological parameters to lower the costs for thermoregulation and to support fattening in fall. The basal metabolic rate is reduced to 63 % of the spring value and the body temperature of normothermic marmots decreased within the thermoneutral zone. This decrease was more pronounced in fall than in spring and summer. The regulation of Tb to lower temperatures allowed the extension of the TNZ by shifting Tlc to lower values. Hibernation reduced energetic costs to 5.8 % of winter BMR of a normothermic marmot.

Alpine marmots are confronted with strong seasonal variations in ambient temperature and food supply. As a means of energy conservation and an adaptation to cold and snow that covers the vegetation they spend the winter months in deep hibernation, huddling together in groups of up to twenty individuals in the depth of their burrows. Animals that show hibernation need to store energy reserves to comply with the physiological requirements of existence either by gathering food in their burrows or by accumulating body fat. Marmots exclusively rely on fat stores as the fuel for the hibernating season that last approximately six months. The remaining six months of the year are time of reproduction and intense and sustained energy intake accompanied by body mass production.

Body weight gain requires that energy intake exceeds energy expenditure and mammals show a variety of adaptations that minimizes energy output e.g. reduced aboveground activity or acclimatization of metabolic rate. The aim of this study was to investigate the extent of seasonal acclimatization of thermoregulatory energy demands and we focussed our attention on the regulation of body temperature and metabolic rate throughout the year.

The marmots in our laboratory were kept in an outdoor enclosure provided with an indoor nesting box and fed ad lib with a mixture of grains, fresh grass and water. In order to measure the metabolic rate (VO2) animals were transferred into a Plexiglas box provided with a small layer of hay and placed in a climate chamber while normothermic or a walk-in climate room during hibernation respectively. Oxygen consumption and carbon-dioxide production were measured in an open system (for methodological details see Heldmaier and Steinlechner, 1981), body temperature (Tb) was recorded using temperature sensitive transmitters and a computerized recording system. Ambient temperature (Ta), measured by a thermocouple attached to the wall of the Plexiglas box, ranged from -0.5Â°C to 15Â°C during hibernation and from -50Â°C to 30Â°C during normothermia. VO2, Tb and Ta at a given ambient temperature were determined in six minute intervals and measured for at least 24h during hibernation or in one minute intervals for at least one hour while animals were normotherm. The minimal VO2 was calculated by averaging the three lowest values each temperature step.

The hibernation experiments were performed with seven individuals in winter 1988/89 and 1989/90, measurements of metabolic rate during normothermia with four animals in April, July, October and December 1990.

1.Seasonal changes of Tb and VO2

Within this span there was no obvious relation between mass specific VO2 and body mass. During the year lower critical temperature T1c was reduced from 20Â°C in spring to 0Â°C in fall and increased again to 20Â°C in winter. This reduction of basal metabolic rate in fall and winter lowers the energetic costs of single Alpine marmots in the thermoneutral zone to 63 % of the value a marmot has to invest in spring or summer. As mentioned above body temperature did not remain constant at various ambient temperatures. The pattern of the course of Tb was similar in April, July and October but became more pronounced by the end of the year. In December the body temperature of marmots was rather constant and remained on a lower level, especially at higher ambient temperatures.

To illustrate the energy savings during hibernation we compared the metabolic rate of a single normothermic marmot in winter with hibernating animals. The marmots hibernated at ambient temperatures between -0.5Â°C and 15Â°C and showed a minimal and constant metabolic rate between 5Â°C and 15Â°C Ta. Below 5Â°C metabolic rate increased linearly with decreasing Ta. Energy expenditure of hibernating marmots in winter corresponded to about 5.8 % the value the normothermic marmot showed within its winter thermoneutral zone.

Alpine marmots exhibit a strong seasonality with regard to thermoregulatory functions like basal metabolic rate, lower critical temperature, extent of thermoneutral zone and body temperature. Considering BMR our metabolic measurements of normothermic marmots throughout the year reveal a seasonal course with highest values found in spring and reduced metabolism in fall and winter. Resting metabolic rate within TNZ well matches values cited in the literature (Armitage et al., 1990) in summer but exceed them in spring. In autumn and winter literature values are higher than those presented in this study. The reduction of energy requirements in fall to 63 % of the spring value in the animal represented supports fattening and is responsible for weight gain prior to hibernation. Measurements of average daily metabolic rate (ADMR) as well as energy intake of marmots show comparable profiles (KÃ¶rtner, 1991). Energy intake always exceeds energy expenditure and reduction of metabolism in fall allows reduction of energy intake as well, which allows reduced foraging time and energy saving behaviour before entering hibernation. Reduction of thermoregulatory energy demands is non-only achieved by a seasonal rhythm of BMR alone but by a shift of Tlc to lower values and an extension of the thermoneutral zone. Resting metabolic rate at an ambient temperature of 0Â°C or 10Â°C - realistic values in an Alpine September is 50 % the value the marmot shows in spring or summer (figure 2). Marmots are less sensitive to cold and living as well as foraging at those temperatures requires half the energy that must be invested early in spring, the time of reproduction and territorial disputes. The shift in lower critical temperature cannot be explained by seasonality of metabolic rate but is due to differences in the regulation of body temperature throughout the year. Marmots increase their body temperature when exposed to ambient temperatures of 30Â°C except during winter where Tb remained low even during heat exposure. With Ta decreasing below 30Â°C body temperature as well decreases to a minimum. The extent of the drop in Tb varies throughout the year and is more pronounced in fall than in spring. To give up a constant body temperature regulated within extreme narrow limits is a very energy conserving strategy because metabolic rate can remain minimal unless Tb reaches a lower point and is regulated again and - very important - the gradient between Ta and Tb is reduced. The more pronounced the drop in body temperature the lower is the ambient temperature that induces thermoregulatory response expressed as heat production. As a consequence lowest body temperature mostly coincides with Tlc.

Hibernation plays a dominant role in the marmots strategy for seasonal energy saving but varies in its efficiency with ambient temperature. The lower the temperature in the burrow, the worse the success of hibernation and the greater the weight loss of the marmot (Arnold et al., 1991).

Fig. 1: Metabolic rate (above) and body temperature (below) of a single normothermic marmot exposed to a stepwise decrease in ambient temperature. The lines connect values of resting metabolic rate or constant Tb at a given Ta. 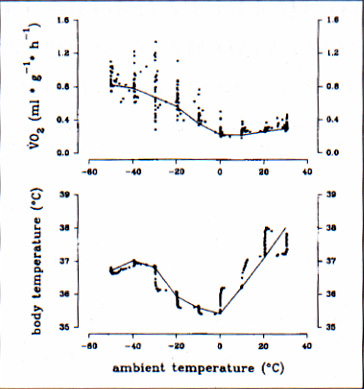 Fig. 2: Metabolic rate (above) and body temperature (below) of a normothermic marmot tested at four different times the year. 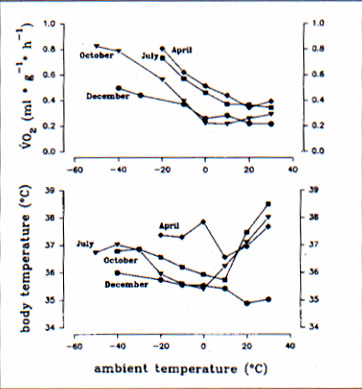 This study was supported by the Deutsche Forschungsgemeinschaft (SFB 305)