THE MARMOT POPULATION OF THE TUSCAN-EMILIAN APENNINE RIDGE

Abstract - In the Modena Apennines above the tree line (1600 -1700 metres a.s.l.), the marmot is today found almost everywhere. The present population is the result of introduction from 1946 onwards. The Spread of this rodent in an environment different to its original alpine habitat offers numerous points of scientific and administrative interest and justifies the eco-ethological study of this population. Since 1988, the daily and seasonal activity rhythms and the social structure of a group of marmots on the northern slopes of the Monte Cimone have been observed. (This study was funded by the Province of Modena, Department of Agriculture, Fish and Hunting and by the Italian Ministero dell'UniversitÃ  e della Ricerca Scientifica e Tecnologica, MURST 60% programme).

Since the 1950's, the marmot (Marmota marmota L.) has been introduced on a number of occasions in various regions of the northern Apennines and is now spread, although not continuously, in the mountainous area from Parma to Bologna (Ferri et al., 1988).

In1987, marmot settlements along the Monte Cimone-Libro Aperto (Modena) ridge were trapped in detail and the location of burrows described in terms of the major environmental characteristics (altitude, exposure, geomorphology etc.). Irrespective of the exposure of the slope, the majority of the area above the line-tree was found to be colonized. Flatter and less steep areas where the substrate is composed primarily of earthy deposits are only rarely colonized, while very rocky parts are not inhabited. Settlement is also affected by vegetation; the extensive vaccinium (bilberry, Vaccinium myrtillus), for example, is carefully avoided (Ferri et al., 1988).

It is known that environmental conditions (altitude, size of territory, availability of food) affect reproduction and, consequently, also the Social structure of the populations (cf. Barash, 1973, 1974a, b). From this point of view, the recently established Apennine marmot population which has settled in an environment somewhat diverse to its original one is of interest for a number of reasons.

Below, we report the results of a three-year study of the density, population structure and dynamics, daily and seasonal activity rhythms, behaviour and the utilization of territory of a marmots group living on the Apennine.

The study was carried out on a number of marmot families settled on the northern slopes of Monte Cimone in an area of about 5 hectares at an altitude between 1800 and 1950 metres. The area is characterized by grassy banks and slopes interspersed with rocky outbreaks and gorges, delimited above by a series of rocky crags and below by the flat grassland of the Pian Cavallaro. The vegetation is typical of the Apennine grazing land above the line-tree (1600 - 1700 metres a.s.l.), where predominantly gramineae areas alternate with the vaccinium. Burrows were marked with numbered metal pegs (Fig. 1) such that they could be localized from a distance and in following years. Every year from 1988 onwards, the animals in the area of study were caught with snares and individually marked. The weight and sex of each animal caught was recorded. Four age groups were distinguished: 1) young, 2) yearlings, 3) two-year olds, 4) adults. Animals in groups 3 and 4 could only be distinguished on the basis of data and markings from previous years.

In order to identify the marmots from a distance, coloured plastic ear clips (Dalton mod. Minirototag 20x5 mm) were hung to the animals' ears and their fur was tinted with hair colouring. Ink tattoos made with ACS 5 pincers and cold marking with freezing gas spray (-40Â° C) were used for long-term individual recognition. Although sometimes difficult to read, the coloured ear clips proved relatively efficient, but rarely survived for longer than a season. Cold marking had no effect on adults. Results were better with young, but still did not allow easy recognition of the animals. Observations were carried out from May to the end of September in alternate weeks for 2-4 consecutive days, beginning at down before the animals leave the burrow and continuing until all return in the evening. The position and activity of the individual animals (Scanning Sample Method, Altman, 1974), atmospheric conditions and air temperature were recorded every 15 minutes.

A total of 607 hours of observation were carried out on 57 days.

In the statistical results, data for one and two-year olds has been combined under " yearlings".

In the first year (1988), six animas, all over two years of age, were caught (identified as A-F). In May 1989, approximately fifteen days after the end of hibernation, five marmots were seen at the same time outside. In June, two couples remained, each occupying its own family territory. Both the male (indicated as 02) and the female (03) of one couple were caught and marked, while of the other couple (female A and male B of 1988), only the female was captured. In July, five offspring of the couple A-B appeared, four of which, three females and one male, were caught and marked (05, 06, 07, 08). On 15 May 1990, five young of the previous year were observed in the study area, but it was non possible to capture them. Five adult marmots, three of which were re-caught and marked (A, 02, and 03), were also seen. In the same period and following wild combat, the male 02 was expelled from its territory by an intruder identified as Z. The couple A-B reproduced five further offspring (four females and one male) who were all caught and marked (10, 11, 12, 13, 14).

In May 1991, the couple 03-Z still occupied its territory, while in the territory of A-B only the five animals born in 1989 were seen. The couple 03-Z reproduced four offspring. The population in the area recorded in the summer thus increased from 7 animals in 1988 to 9 in 1989 and 14 in 1990, but fell to 11 in 1991. The particular demographic situation revealed in 1991 appears to confirm that also in the Apennines climatic conditions immediately following the end of hibernation play an important role in population regulation. Indeed in 1991, heavy snowfall directly after winter hibernation around 20 April left a complete covering of snow which persisted for more than a month and restricted the feeding land of the marmots which were already active.

In the area of study and in those adjacent of the Monte Cimone, the marmots occupy clearly defined family territories which they actively defend against intruders. Only occasionally do the yearlings and young of one family enter neighbouring territory, and only then the outer edges, and do not experience particular aggression on the part of the residents. It can thus be said that the families in the area of study on the Monte Cimone do not constitute a colony (cf. Mann & Janeau, 1988). The size of the family territories on the Monte Cimone (22.5 hectares) is comparable to those of the Alpine populations: 1.4-2 hectares according to Zelenka (1965); 2-5.7 hectares for Mann & Janeau (1988); on average 3.6 hectares in the Gran Paradiso park according to Lenti (1988). Habitation in different burrows in the summer and the winter, which has been frequently seen in the Alps (Couturier, 1964; Zelenka, 1965; Barash, 1976; Huber, 1978; Durio, 1988; Lenti, 1988), does not seem to be the case in the Apennines. Of the four families observed over the last years in the area of study and surrounding territories, two used different burrows, while the other two remained in the same burrow throughout the year for both reproduction and hibernation. Behavioural observations were frequently disturbed by adverse meteorological conditions which lead to difficulties both in on site observation and in the subsequent statistical analysis. Nevertheless, results over the years remained for the main part consistent.

Marmots in all age groups (adults, one and two-year olds and young) spend the majority of their time in the burrow (Fig. 2). In general, adults spend more time outside than the yearlings, and these more than the young.

In adults, time spent outside is primarily dedicated to test (14.5%). 9.7% of their time is spent feeding, 4.5% in movement and 3.6% in other activities (social interaction, surveillance, marking of territory etc.). In the yearlings and young, on the other hand, the main activity is feeding (12.4% and 8.2%, respectively). The yearlings spend the same amount of time in social interaction as in movement across the territory (3.8%) (Fig. 2). Feeding increases progressively up to the end of July in adults and up to the end of August in others, and then falls in subsequent months (Fig. 3). Friendly interaction (play, grooming etc.) is particularly intense among young, especially in July immediately following emergence from the natal burrow. For the main part, this interaction is amongst themselves or with the mother, rarely with the father.

Following emergence of the young, increased vigilance on the part of the parents was noted. The incidence of friendly interaction (play) is still high amongst the yearlings of the same age. Aggressive interaction was seen primarily in spring and only amongst adults of different families. On average, marmots become active about half an hour after dawn. Rainfall affects the onset of morning activities, whereas fog and wind show no significant influence. Return in the evening is determined to a greater extent by the weather. In general, adults are outside in the early part of the morning and in the late afternoon, while the activity of the yearlings and even more so of the young is more evenly distributed across the whole day (Fig. 4). In agreement with the findings of Arnold (1988) in M. marmota and Armitage (1976) in M. flaviventris, the observations suggest that in the Apennine population there is also a correlation between daily activity rhythms, temperature of the environment and size of the animal. This first report on marmot behaviour complements recent observations of the alpine populations carried out by Swiss, French and German researchers (cf. Arnold, 1988a, b, 1990a, b; Mann & Janeau 1988; Solari 1988). The aims of future observations are: 1) an evaluation of family group dynamics and the establishment on the basis of an analysis of individual histories of the reproductive strategies of this large rodent; 2) determination of the use that the animal makes of its territory and a better understanding of the existing relationships between behaviour and environmental variables.

Fig. 1:View of the area of study, reproducted from a photograph.

ritorno/back
Fig. 2: Monthly distribution of the time spent by mannots in different activities.

Fig. 3: Mean frequency of the time spent in the different activities by the three age groups. 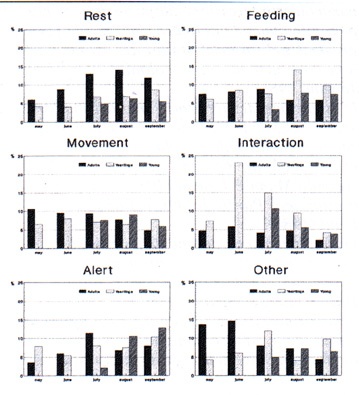 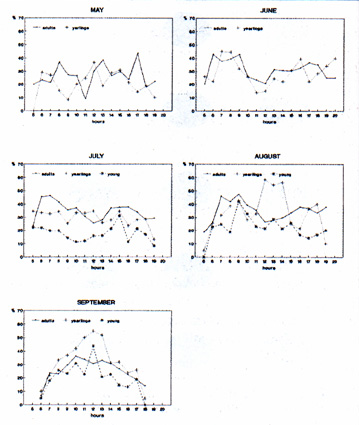 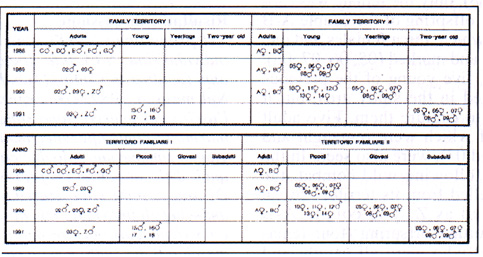 ARNOLD W., 1988b - Thermoregulation as a limit to habitat use in alpine marmots (Marmota marmota).