Abstract - Three adult Alpine Marmots (Marmora marmota) were studied, during winter 91, in a dark room under constant ambient temperature (8Â°C). Behaviour and skin temperature were continuously recorded, during the whole period. Behavioural patterns and percentage of activity, observed during arousal phases, showed no significant variations from one arousal to another whatever the duration of the arousals may be. Constant ambient conditions allowed us to show a free-running circadian activity rhythm, the period of which varied from 25 to 34 hours, depending on the individuals. Marmots seemed able to adjust their activity in relation to duration of their arousals. Adjustment of activity and adoption of postures reducing heat losses might contribute to a minimization of energetic expenses.

Hibernation is at present being studied, by many French researchers, but Alpine Marmot model seems to be discarded, despite its important sample in France.

Dubois published the first study on physiology of hibernating alpine marmot, at the end of the last century (1896).

Later, in the sixties and seventies, Kayser (1963) and Malan et al. (1973), studied some respirometric and energetic aspects on hibernating marmots. Very few works about behaviour and chronobiology have been realized, during hibernation, despite the fact that physiological aspects of hibernation of Alpine Marmot have often been studied.

Arnold (1988) showed energetic consequences of behavioural and social thermoregulation in family groups of hibernating Alpine Marmots. These two topics were (during winter 1991) the subject of the present study.

The aim was first, to describe behavioural patterns and temporal distribution of activity during arousal states and, second, to show up the possible existence of a free-running circadian activity, in relation to the constant darkness in which Marmota marmota lives in its natural habitat, during hibernation season.

Three adult Alpine Marmots were used in this study, two males (called V and C) and one female (called L). They came from the Natural Park of Mercantour, in the department of Alpes Maritimes, France, and lived in captivity at the National Veterinary School of Lyon, since three years. These marmots belonged to different social groups. Two of them lived together in the same cage. Each marmot could be identified by its particular fur pigmentation. These three individuals were grouped in the same glazed cage, without food and water and placed in a cold dark room, under constant ambient temperature of 8Â°C.

Animal behaviour was continuously filmed and recorded by means of infrared camera and a time-lapse videotape recorder. Date and hour were recorded too. Temperature picks up, located in the false floor of the cage, allowed us to follow evolution of skin temperature of marmots during the season and precise arousal states.

Videotapes were analysed in order to draw up an inventory of different behavioural patterns and to establish the temporal distribution of activity during arousal phases. Frequencies and durations of behavioural patterns were noted for each individual. During each arousal, every behavioural pattern called "Sequence Motrice Simple" (S.M.S.) (Gervet & Truc, 1974) was expressed in percent of total number of S.M.S.. Daily durations of activity, expressed in minutes per hour, allowed us to realized actograms and periodograms, in order to define the periodicity of a possible activity rhythm.

Behavioural patterns were compared on different non independant periods (periodical arousals). As we disposed of a limited number of animals Friedman non parametric statistical test was used with a threshold of 0.05. For statistical treatments of circadian rhythms in order to show a possible significant period of activity, Chi-square periodograms of Sokolove & Bushell (1978) were used.

Marmots were observed during 91 days. The behavioural patterns were counted, mainly during arousal states. They were classified according to their affinity.

- Allogrooming: one individual grooms the fur of another individual.

- Game: only observed between the two males at the end of the season, animals pushing themselves with their forelegs.

- Nest building: animals reorganize the hay around themselves.

- Chewing of the hay: animals split up the hay into little fragments without consumption of it.

This behavioural pattern was observed at the end of the season.

During the season, one of the three marmots awaked completely on one of the six temperature picks-up. Its skin temperature evolved according to two stages (Fig. 2). The first one showed a slow increase of skin temperature (rewarming speed was around 0.4Â°C/hours), probably initiated by utilization of brown fat. The second stage showed an acceleration of the rewarming process (speed was around 5Â°C/hours) which was related to shivering of the animal.

During this experimentation, two rhythmicities were shown up:

- Free-running circadian rhythmicity related to the constant environmental factors of the room. The durations of marmot activity, obtained through analysis of videotape recording, allowed us to realize actograms for each animal (Fig. 5a).

In a first time, "full length" actograms were first realized, including the whole season of hibernation (91 days) with arousal and hibernation phases. Analyses of these data by Chi-square periodograms showed no evidence of significant period of activity rhythm. The hibernation phases, during which no activity was recorded during several consecutive days, created a "dilution effect" in the data. For that reason, they were deleted and data on arousal phases were joined end to end. "Rectified" actograms resulting from their transformations, allowed us to emphasize a temporal organization of activity (Fig. 5b).

The rate of activity was more important at the beginning and at the end of each day. Chi-square periodogram analyses showed existence of two parts in these new actograms. A first part in which no significant period of activity rhythm can be shown. A second part, in which a significant period of activity was shown for each of the three individuals (Fig. 6). An important interindividual variability was observed between the three marmots. Periodicity was about 25 hours for the female, 31 hours for the C male and 34 hours for the V male.

Behavioural study shows that our marmots presented the same percentage of activity during awake phases. They seem to be able to adjust their rate of activity according to the duration of arousals. Studies of time-distribution confirm the functioning of the biological clock during hypothermic phases and the conservation of a circadian rhythm from one arousal to another. This fact was already demonstrated by Canguilhem (1991) in other species of hibernating rodents. The present study also shows a great variability of the free-running circadian rhythm between individuals. The difference between the significant period of L and V (9 hours) seems very important. No obvious reason can be given to explain such variability, observed on individuals submitted to the same experimental conditions. Variability might result from the influence of all the factors, which contribute to diversify populations. Variability could result too from data modifications required for the statistical treatment.

These hypotheses could be applied too, to the durations of arousals and of hibernation phases. In spite of similar experimental conditions, the data given by Arnold (1988) differ greatly from ours: torpor duration of his animals was around 344 hours (twice the values we observed) and awake duration was around 24 hours (half the values we observed).

seems able to control its energetic potential by its behaviour. Self-management of its rate of activity and adoption of postures reducing heat losses (curling) might contribute to an important limitation of energy consumption during the arousal states.

This work is part of the research program "Dynamics of space occupation by Alpine Marmot" supported by the French Ministery of Environment (EGPN 90-294). We would like to express our gratitude to Mme Chantal Jacquet of National Veterinary School of Lyon (INSERM U 271) for the loan of her three Alpine Marmot actresses and to Dr R. Allemand (UA CNRS 243) of Claude Bernard University of Lyon for his contribution to the statistical treatments of circadian activity rhythms.

Fig. 2: the evolution of marmot skin temperature during one of rewarming phases. Non shivering thermogenesis and shivering seemend to be used for the increase of the body temperature.

Fig. 5a: "Complete" actogram of the female 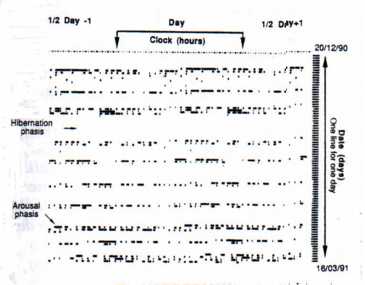 Fig. 5b: "Rectified" actogram of the female

Fig. 6: Periodograms of the 3 marmots realised from the second parts of the rectified actograms. 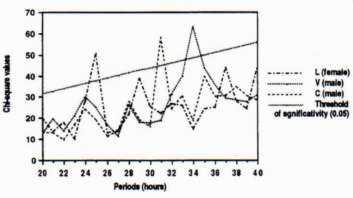