Italian Department for State Park; and Forest Service of the Autonomous Province of Trento

Abstract - The research for the duration of 3 years 1987/1989 has been divided into three phases:

1) Analysis of the distribution of the Alpine Marmot within the Park territory;

The Italian Department for State Parks and Forest decided to undertake research on the Alpine Marmot due to a previous lack of scientific data of that species in the Paneveggio-Pale di San Martino.

The purpose of this survey is to provide general information on the behaviour of the Marmot in order to gain an understanding of how to manage the park, with respect to this species. The research was divided into three parts: first, a demographic analysis of Marmots in the park, second, a behavioral study, and third, a study of sound communication of the Marmot.

First, the park was divided into regions; each region being assigned to one park ranger. Regions were then surveyed to determine Marmot population levels in that region, and to determine which factors were significant influences on the choice of habitat of the Marmot. In this survey, 66 Marmot colonies were identified in heterogeneous settings with regard to vegetational and geomorphological factors. Marmot populations are distributed in throughout the park, with a variety of factors seeming to influence location.

The results of our research indicated that Marmots colonize areas with a substratum of porphyry rock (31 %), porphyry-micashists-quarzt rock (25 %), and limestone (44%) evenly (differences in population correspond approximately to the geological variations in the park). During this phase of the study, five sample colonies were selected in order to analyze the organization of the burrows through a topographical survey.

An interesting characteristic of Marmot burrows was the lack of special summer or winter burrows; Marmots seem to use the same burrows to hibernate as well as to birth and suckle their young. Dens have only one entrance over a large terrace. The entrance is generally sheltered by rocks, which help to melt snow in the spring by absorbing and reflecting solar radiation. They are also used by Marmots as lookout posts. On average, the Marmot burrows which we studied had entrances with the following dimensions: diameter 35 cm, width 30 cm and height 19 cm.

The shape of the entrance varies according to the substratum of rock in the area. Marmots secondary or escape dens have on average the following dimension: diameter 30 cm, width 24 cm and height 18 cm and can be either round or oval in shape. The data which we collected showed that Marmots do not have a preferred orientation for their escape dens; this is probably due to the particular functions that these dens play in Marmot colonies. Another interesting feature of the Marmot colonies that we surveyed was the lack of latrines.

Each colony surveyed was mapped in order to estimate its geographical characteristics, and to observe its evolution over the years.

At the end of this phase of the study, the subjects were captured by means of nooses placed in the entrance of the burrow.

The subjects were injected with a combination of chlorohydrated of Ketamin and Xylazin (Lenti, 1988) through a deep intra-muscular injection (unsuccessfully) and then marked with colored ear plates, and branded with a freon (2 minutes of exposure to freon for adults, 40 seconds for young marmots).

In June 1988, a sample colony was chosen to carry out ethological research. It was occupied by one adult male (Flynky), one adult female (Jessica) and three immature (M1-M2-M3) Marmots. During the following month, the male was predated, and the female gave birth to four young.

In the period between June and September 198a, a study was carried out regarding the Marmots circaclian behavioral patterns and each animal was censused every 1 minute (table 1). With regard to resting time both on the burrow terrace, and in other locations (Lenti, 1983), the position that the Marmots assumed (and the amount of time spent in each position) is reported in the same table.

During the period between June and September, 181 sequences of greetings were observed (Fig. 1).

During that same period, 55 sequences of grooming were observed, 22 preceded by a greeting. In 50 of the cases, the body part groomed was identified. In the Fig. 2, the first letter indicates the individual which initiated the grooming behaviour.

Only typical play sequences were recorded (posture "X"). Between June and September, 70 sequences were observed, 52 of which involved young (Fig. 3).

All members of the colony took part in this behaviour, and it is interesting to note that 34 out of 36 cases observed, took place in September. In these cases, the grass was used line the burrow during hibernation (Fig. 4).

The study of sound communication was carried out by means of registrations of the "screams" recorded on the fields with a cassette recorder and Marantz tapes type CP 230, and the help of a condenser microphone AKG type C 451 and with a directional capsule CK 9. Afterwards the recorded screams were selected and copied on bobbins by means of a bobbin recorder type U HER 4000 Monitor to register them in the archives and analyse them in the laboratories. The analysis took place at the Interclisciplinary Bio-Acoustic Centre of the lnstitute for Entomology at the University of Pavia by means of the signal analyser in real time KAY SONOGRAPH Model DSP 5500 thanks to the cooperation of Dr. Gianni Pavan. The screams can be distinguished in: a single scream characterised by the are distinguished as follows ssion a single note; screams in sequence made up by a rapid sequence of notes, sometimes interrupted by longer pauses and series of screams composed by a variable number of consequent screams.

The analysis of these parameters carried out on 417 notes gave the following result: Maximum frequency: the results concerning the pause of F max included between 2500-3700 Hz with a principal peak between 2700-3000 Hz

Length of the note:

the interval of frequency is included between 0.04-0.2 seconds with a principal peak between 0.06-0.12 seconds.

I wish to thank the Italian Department for State Parks and Forests of the independent province of Trento and particularly Dr. M. Zorzi, Dr. D. Zorzi, Dr. G. Nicolini and Dr. V. Cattani. A special thank goes to the forest personnel of the Park of Paneveggio-Pale by San Martino, to the gamekeepers Herlacher, Pizzoli, Zugliani, to Dr. G. Volcan, Dr. G. Pavan and to Dr. L. Cagnolaro vice-director of the Civical Museum of Natural History in Milan.

Italian Department for State Park; and Forest Service of the Autonomous Province of Trento 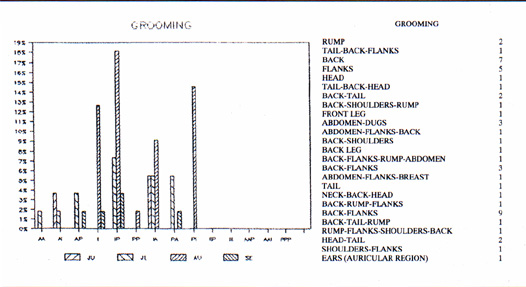 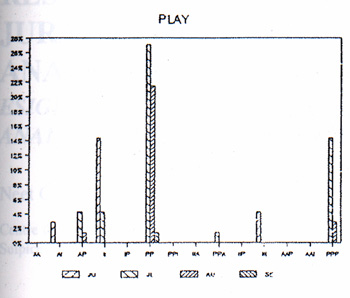 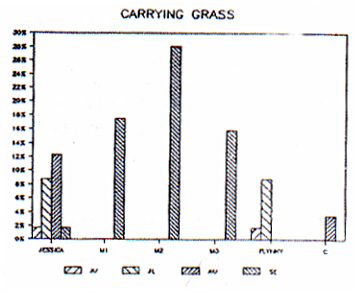